In my view Ukemi should not be a principle focus of Aikido practice. Let me explain why.

Ukemi is a vital technique used in being able to survive a throw by Nage.

Ukemi, or what I see is people rolling across the floor or taking leaps as a form of activity should not be a focus of Aikido practice. As much as there is benefit in receiving this type of impetus for the facia and internal organs of the body it creates a mindset that Ukemi is the point mom Aikido practice.

“I practiced in both systems from 1963 forward and have first-hand knowledge of the training conditions that prevailed in those days … One might be led to believe that training was not vigorous.

On the contrary, it could be very exhausting, especially in Kisshomaru’s style. However, the severity of training in such situations was due to the cardiovascular demands placed on the body due to the non-stop movement, and endless falling and standing up during practice.

I found it particularly difficult to train this way in hot and humid practice conditions.” 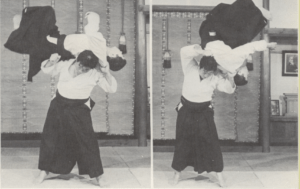